Last weekend despite of the feezing cold weather forcast I had my first backcountry skiing tour for this season.

Our destination was Pfronten, near the austrian border on the german side. Starting there saturday morning we had about 25 min to drive to the starting point of our tour, a parking lot at Haldensee.

Starting at Haldensee (1128 height), we had to go up for 12.4 km until we reached the summit of Sulzspitze at 2084 m height after a 4 hours walk. On saturday it was a sunny day with about -5 °C. As we were skiing down to the valley again we had nice soft snow and even some left over powder on the northern hillside. 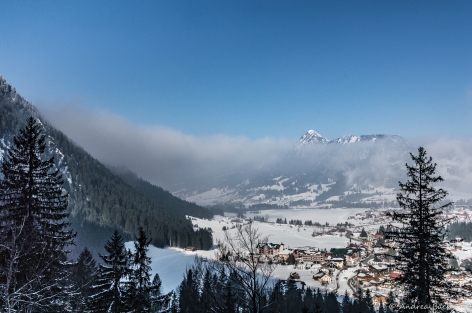 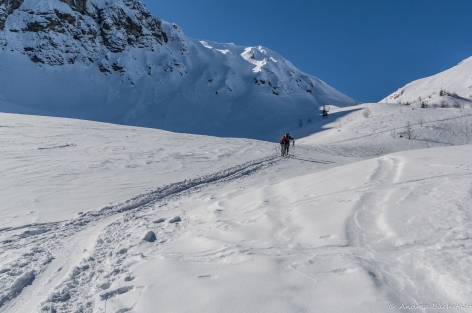 break in the sun

The backcountry tour itself was quite varied with an amazing view from the summit.

On sunday, the more cloudy, windy and over all colder day (-12 °C) we choose a small place called Namlos as starting point to Tschachaun in Lechtal.

Carefully chosen, the tour started in a valley from north to south and so there was nearly no cold wind, because the wind was coming from the eastern side. We started in Namlos and went up for 1150 meters for 17 km until we reached the summit at 2334 m height. At the beginning the tour follows a little creek and stays quite flat. After half of the distance it was getting steeper and steeper over wonderful left over powder on northern slopes as well.

The summit was flat and wide, and shortly before I reached my companions I saw two snow grouses and was really angry at me for having left my camera in the car (I thought it was probably too cold for taking photographs). The funny thing when I saw them first: I was wondering, why the snow heap was running away from me…

The deep powder of the middle slopes of the tour made up for the hard and snow crusted first hillside which was really no fun to ski.